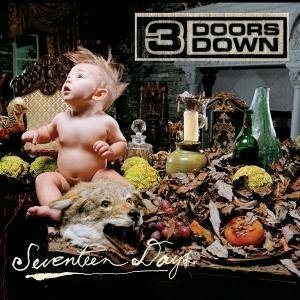 This album was delayed shortly in 2004 because 3 Doors Down was busy touring around with their previous album Away from the Sun.
The live version of "It’s Not Me" was featured on Another 700 Miles EP.
Many people believe the album was written by the band in seventeen days, hence the name of the album, but this is not true. The name was created because the band only had 17 days off from the end of their Away from the Sun tour and being back in the studio to work on their new album.
Seventeen Days was certified platinum just a month after its release.
"Behind Those Eyes" was used as one of two theme songs for the World Wrestling Entertainment (WWE) event, WrestleMania 21.
This is the last studio album to feature drummer Daniel Adair who left the group to join Nickelback, also single Let Me Go is his final single with them (3 Doors Down).