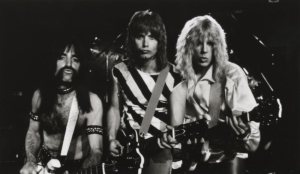 Additional notes
A band made up for the mockumentary "This Is Spinal Tap", a satire of the hard rock and heavy metal music scene. It is both made-up and real, because the band members are American actors posing as British musicians, yet they have performed concerts and released records under the name Spinal Tap.

The fictional former members in the movie are as follows:

(Ric Parnell was a real drummer and in real life served as a member of Atomic Rooster, among others)