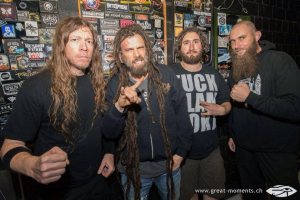 Additional notes
A side project band started by Chris Barnes and Allen West of Obituary. Originally, the band was intended to just remain a side project, but after Chris was ejected from his original band Cannibal Corpse, Six Feet Under became his priority, subsequently moving the band from a side project to the long running act they are today.

Guest appearances through various Six Feet Under albums include Ice-T on True Carnage''s "One Bullet Left" and Karyn Crisis of Crisis fame on the True Carnage song "Sick and Twisted." Many consider this the first death metal duet between a male and female.