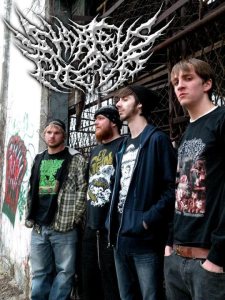 Additional notes
Tyler Sharpes formed the band, performing all the instruments early in the project's existence, but switched to the second guitar position when a full band lineup first came together. When the band fired the original singer Logan Karkenny, Sharpes switched back to vocals though his current vocal style bears no resemblance to his previous style. Since his move away from rhythm guitar, there has been no second guitarist in his place and were kept as a four piece.

Short Bus Pile Up's earliest material (with Sharpes on all instruments) was under the deathcore/electronica genre. However, after the band recruited a full time lineup, these releases have been completely disowned by the band and aren't even mentioned in the band's discography listings on their social networking websites. Sharpes explained that the early material was "all a joke" and that it "isn't the sound we want our fans to associate with us. We've evolved from that and it's been difficult for most people to understand."