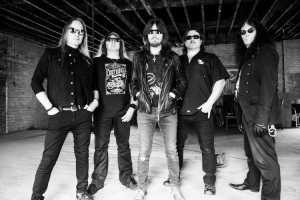 Additional notes
Satan would change their name to Blind Fury after the release of their debut Court in the Act. The former singer Brian Ross was replaced by Lou Taylor who was in Satan once before and himself was also, ironically, replaced by Brian Ross. After they released Out of Reach they changed their name back to Satan and Michael Jackson joined on vocals. In 1988, they changed their name again, this time to The Kindred and then to Pariah. They recorded two more albums and then quit, with a reformed version of Pariah releasing a third album in 1997.

The Court in the Act line-up of Satan reunited for a one-off show at Wacken Open Air in 2004, with Phil Brewis filling on drums as Sean Taylor had suffered an injury and was unfit to perform. A permanent reunion of the full debut album line-up eventually took place in 2011.