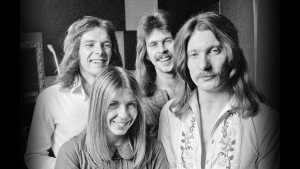 Additional notes
The history of Renaissance is essentially the history of two separate groups, rather similar to the two phases of the Moody Blues or the Drifters. The original group was founded in 1969 by ex-Yardbirds members Keith Relf and Jim McCarty as a sort of progressive folk-rock band, who recorded two albums (of which only the first, self-titled LP came out in America, on Elektra Records) but never quite made it, despite some success on England's campus circuit.

The band went through several membership changes, with Relf and his sister Jane (who later fronted the very Renaissance-like Illusion) exiting and McCarty all but gone after 1971. The new lineup formed around the core of bassist Jon Camp, keyboard player John Tout, and Terry Sullivan on drums, with Annie Haslam, an aspiring singer with operatic training and a three-octave range.

Prologue Their first album in this incarnation, Prologue, released in 1972, was considerably more ambitious than the original band's work, with extended instrumental passages and soaring vocals by Haslam. Their breakthrough came with their next record, Ashes Are Burning, issued in 1973, which introduced guitarist Michael Dunford to the lineup and featured some searing electric licks by guest axeman Andy Powell. Their next record, Turn of the Cards, released by Sire Records, had a much more ornate songwriting style and was awash in lyrics that alternated between the topical and the mystical.

Renaissance Ibiza The group's ambitions, by now, were growing faster than its audience, which was concentrated on America's East Coast, especially in New York and Philadelphia -- Scheherazade (1975) was built around a 20-minute extended suite for rock group and orchestra that dazzled the fans but made no new converts. A live album recorded at a New York concert date reprised their earlier material, including the "Scheherazade" suite, but covered little new ground and showed the group in a somewhat lethargic manner. The band's next two albums, Novella and A Song for All Seasons, failed to find new listeners, and as the 1970s closed out, the group was running headlong into the punk and new wave booms that made them seem increasingly anachronistic and doomed to cult status.