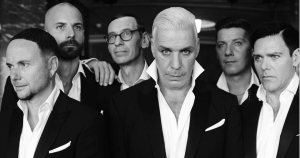 Additional notes
The band called themselves Rammstein-Flugschau (Rammstein Airshow) after the 1988 Ramstein air show disaster. Guitarist Paul H. Landers said the spelling of Ramstein with the extra "m" was a mistake. After the band became popular, the bandmembers denied the connection to the air show disaster and said that their name was inspired by the giant doorstop-type devices found on old gates, called Rammsteine. The extra "m" in the band's name makes it translate literally as "ramming stone."

Rammstein has had no changes in their line-up. Richard Kruspe had said in a Revolver Magazine interview that it is because of the band respecting each other's wishes to take a break; either for personal reasons or to focus on a side project.