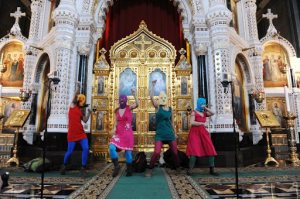 Additional notes
Pussy Riot is a Russian feminist punk rock protest group based in Moscow. Founded in August 2011, it has a variable membership of approximately 11 women ranging in age from about 20 to 33 (as of 2012).

In February 2014, a statement was made anonymously on behalf of some Pussy Riot members that both Alyokhina and Tolokonnikova were no longer members.