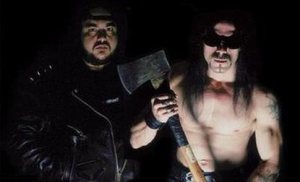 Additional notes
The band was founded in 1989 under the name Casket, but their name was later changed to Mortician after writing their first song, "Mortician".

Will Rahmer was Incantation's vocalist during the period John McEntee played in Mortician.

The band has an obsession with horror and sci-fi movies, which is where their main influences comes from lyric wise. In every album, they use stock sample footage from movies on almost every track, in the vein of Impetigo.

Drummer Matt Sicher was Mortician's original percussionist up until his death in 1994. Not wanting to replace him as a steady member in the band, they decided to use a drum machine from there on out. Also, they couldn't find anyone that could measure up to the insane speed Mortician wanted, which brought in the use of drum machines. The first recordings made with a drum machine were released exclusively on the "Corporate Death" Compilation released by Relapse Records in 1993. The 3 songs were "Embalmed Alive", "Hacked Up For Barbecue" and "Abolition". These tracks were recorded in January of 1993 and were re-released on the 2004 reissue of "House by the Cemetery / Mortal Massacre"

An unreleased Mortician song, called "Traces of Death", can be exclusively found on the soundtrack for the documentary "Traces Of Death III". This CD was released by Relapse Records in 1995.

Mortician recorded the track "Skin Peeler" exclusively for the "Gummo" soundtrack in 1997.

Will Rahmer is the owner of Redrum Records (aka Mortician Records), which has a line-up of death metal locals like Fecal Corpse. Will Rahmer is also the co-founder of the New York Death Militia (NYDM) along with Randell Salmon of Decomposed (USA).

Will Rahmer was arrested in Poland on November 13, 2005. The band had just finished playing a show without Rahmer in Zielona Góra when he had called a Taxi to take him to the Berlin Airport. Rahmer then threatened the taxi driver with a small knife and stole the Cab and drove himself to the Polish / German border where he was then picked up by the Police. He was placed under arrest and faced charges up to a maximum of 3 to 15 years in jail. He is now back in the USA.
Album Reviews
Album Comments
Track Ratings
New Albums
Upcoming Albums
Videos
Top Albums
Album of the Year
Top Tracks
Latest Artists
Latest Albums
Latest Lyrics
Artist Photos
Advanced Search
A
B
C
D
E
F
G
H
I
J
K
L
M
N
O
P
Q
R
S
T
U
V
W
X
Y
Z
etc.
Pop
Rock
Metal
Jazz
Soul
R&B
Hip Hop
Blues
Country
Electronic
Free Board
News
Playlist of the Day
Market
Music Videos
Polls
Notice
Site Status
Users : 446
Online
Artists : 5,195
Albums : 39,786
Reviews : 626
Lyrics : 1,023
Add an Artist
HOME
Close