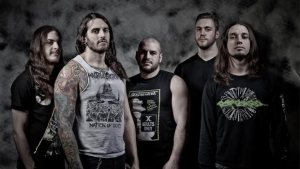 Job for a Cowboy

Job for a Cowboy Discography

Additional notes
Job for a Cowboy was founded by vocalist Jonny Davy, guitarists Ravi Bhadriraju and Andrew Arcurio, bassist Chad Staples, and drummer Andy Rysdam in December 2003. All of the members were at the age of 15 or 16 at the time the band was formed.

The band originally started as a deathcore group, but changed their style to death metal with the release of their first full-length album Genesis. On subsequent albums (from Ruination onward), they shifted towards a more technical and progressive style of death metal.
Contributors