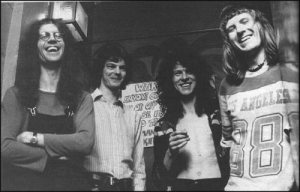 Hatfield and the North

Hatfield and the North Discography

Emerging from the Canterbury, England musical community that also launched Gong and Kevin Ayers' the Whole World, the whimsical progressive rock unit Hatfield and the North formed in 1972. Named in honor of a motorway sign outside of London, the group's founding membership brought together a who's who of the Canterbury art rock scene -- vocalist/bassist Richard Sinclair was a former member of Caravan, guitarist Phil Miller had tenured with Robert Wyatt in Matching Mole, and drummer Pip Pyle had served with both Gong and Delivery. After a series of lineup shuffles, keyboardist Dave Stewart (an alumnus of Egg) was brought in to complete the roster, and in tandem with the Northettes -- a trio of backing vocalists consisting of Barbara Gaskin, Amanda Parsons, and Ann Rosenthal -- the group began gigging regularly.

Upon signing to Virgin, Hatfield and the North recorded their 1974 self-titled debut LP, a jazzy work halfway between melodic pop and more avant-garde stylings. A single, "Let's Eat (Real Soon)," appeared at the end of the year, and in 1975 the group resurfaced with The Rotters' Club; although the record briefly landed in the U.K. charts, their commercial future looked dim, and so Hatfield and the North disbanded within months of the album's release. Sinclair soon joined Camel, while Stewart recorded with Bill Bruford before finding pop success in 1981 with ex-Zombie Colin Blunstone on a cover of the Jimmy Ruffin chestnut "What Becomes of the Broken Hearted?" Stewart then continued in a pop direction in a duo with former Northette Barbara Gaskin, releasing a cover version of "It's My Party," which became a number one pop single in the U.K. during September 1981. Stewart & Gaskin continued issuing singles and albums throughout the '80s, although none achieved the pop success of "It's My Party."

In 1989, Hatfield and the North reunited for a series of live dates featuring Miller, Sinclair, Pyle, and -- in place of Dave Stewart -- keyboardist Sophia Domancich (Pyle's girlfriend at the time and also a member of his band Equipe Out); a document of a March 1990 performance by this lineup in Nottingham, Live 1990, arrived in 1993, followed by the Classic Rock Legends DVD in 2002. This incarnation of the group was short-lived, although Hatfield and the North would return in the mid-2000s with keyboardist Alex Maguire replacing Domancich. The band toured during 2005 and 2006, making festival appearances at such events as BajaProg in Mexico and NEARfest in the United States. On August 28, 2006, Pip Pyle died at age 56 in a Paris hotel room shortly after returning to his adopted home country of France following a Hatfield and the North show in Groningen, The Netherlands.
Album Reviews
Album Comments
Track Ratings
New Albums
Upcoming Albums
Videos
Top Albums
Album of the Year
Top Tracks
Latest Artists
Latest Albums
Latest Lyrics
Artist Photos
Advanced Search
A
B
C
D
E
F
G
H
I
J
K
L
M
N
O
P
Q
R
S
T
U
V
W
X
Y
Z
etc.
Pop
Rock
Metal
Jazz
Soul
R&B
Hip Hop
Blues
Country
Electronic
Free Board
News
Playlist of the Day
Market
Music Videos
Polls
Notice
Site Status
Users : 462
Online
Artists : 5,243
Albums : 40,021
Reviews : 626
Lyrics : 1,180
Add an Artist
HOME
Close