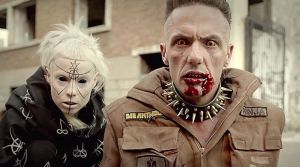 Additional notes
Die Antwoord lead vocalist Ninja (born Watkin Tudor Jones) was a part of the South African hip-hop scene for many years, fronting such acts as The Original Evergreen, Max Normal, Fucknrad and The Constructus Corporation. He is known for adopting different stage personas. In the case of Die Antwoord his persona is Ninja: a hyper violent character who is very different from his previous incarnations.

Die Antwoord was later created as a group in 2009, consisting of performers Ninja, Yo-Landi Vi$$er, and DJ Hi-Tek. Their debut album $O$ was made available as a free download on their official website. In 2009 South African cinematographer Rob Malpage (along with co-director Ninja) shot the video for their single "Enter the Ninja." The video became a viral phenomenon on the internet nine months later, delivering so much traffic to their official website that their original provider shut down their account, forcing them to move their hosting to a US-based provider to handle the traffic. The "Enter The Ninja" video also features South African progeria survivor Leon Botha, a prominent Cape Town artist.