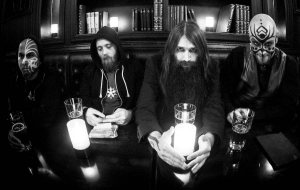 Additional notes
DHG was originally formed in 1994 under the moniker Dødheimsgard which is a conjunction of three words: Død which means death, Heim which means home and Gard which means mansion (at least in this context). A natural translation of Dødheimsgard into English would be "Mansion/house of Death" or "Realm of the Dead/Death."