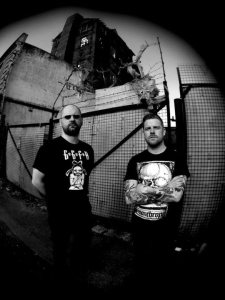 Additional notes
Supposedly, their name comes from the spell Merlin utters in the movie Excalibur, which starts with "Anaal Nathrakh...". This spell is called the "Charm of Making". Given Michael Everson's transcription, "Anaal Nathrakh" means "serpent's breath".

The band originally started as a raw black metal band. With the release of Domine Non Es Dignus, they shifted more towards a grindcore/black metal sound.

Lyrical themes must be drawn from context as the band has stated repeatedly that they will not publish lyrics.

Vocalist Attila Csihar (Mayhem, Aborym, Keep of Kalessin, Tormentor) is a friend of the band and contributes guest vocals from time to time, and, in particular, on When Fire Rains Down from the Sky, Mankind Will Reap as It Has Sown and Eschaton.

Anaal Nathrakh played a Peel Session (a studio recording for the BBC aired by legendary DJ John Peel) in 2004, with Nick Barker and Shane Embury on drums and bass, respectively. For years the band maintained they would never perform live on stage. However, they played two gigs in December 2005. Whether these were the first of many or the only ones they will perform was unclear until the release of Eschaton when the band announced that they would return to the stage in the album's insert; shortly afterwards, the band was confirmed for the 2007 edition of the Inferno Festival in Oslo. They have continued to make festival appearances and play short, but fairly regular tours ever since.