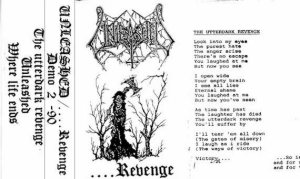 - Covers printed on glossy cardstock, not regular paper
- Two versions of the tape exist
- Lyrics included
- The back has a thanks list and a large CBR logo

as the first demo sold around 3000 copies.
Also released as a single by CBR Records in October, 1990 limited to 800 copies.