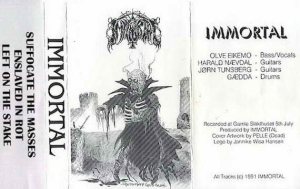 Contrary to popular knowledge, Immortal has released only one demo, and it's untitled.
This demo is also often referred to by fans as "Suffocate" or "Suffocate the Masses".

The primary source of confusion over its title is the cover. The name of Dead's drawing is "The Northern Upir's Death", but even the drawing is commonly misnamed, mistaken for "The Northern Upins Death" due to Dead's style of handwriting. An Upir is a type of vampire from Slavic folklore.

The artwork of this demo was also re-used when the cassette promos for the Immortal EP were released.

It is unclear whether "Outro" is on the original tape, or if it was simply included later by bootleggers - the cover does not mention the track, either way.

It is also unclear whether the demo was recorded live or not. Gamle Slaktehuset is a combined live venue and youth center in Haugesund.

Immortal played death metal on this tape. At least one riff was later used for their early album material.