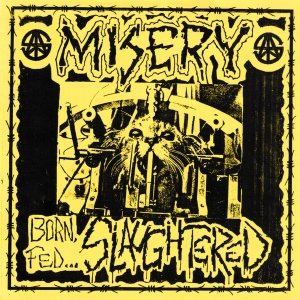 Additional notes
Recorded in Minneapolis, MN in March 1989.
600 copies pressed.
8 inch by 14 inch folded, photocopied covers.
This release was originally intended to be a 4 Track release.
Inside cover contains lyrics for 4 songs. Also contains a second lyric sheet with the 2 tracks actually released on the single.
Some copies had the correct track listing lyric sheet stuck over the original wrong track listing and the incorrect track listing on rear crossed out by hand.

From the liner notes: "Our Apologies - this single was originally going to be a 4 song release. but we later learned (after covers, ads and master tape were completed) that only 6 mins. per side could be pressed. Since our songs are in the 3-4 min range, we could only fit two. Please look for the other 2 songs (plus one other) on our upcoming "Blindead" single."