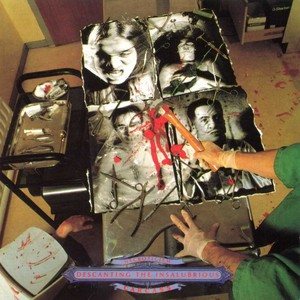 Recorded at Amazon Studios, Simonswood.
Mixed by Carcass.
Music videos were made for "Incarnated Solvent Abuse" and "Corporal Jigsore Quandary".

The 1995 re-issue contains three tracks from the Tools of the Trade EP:
9. Tools of the Trade (03:05)
10. Pyosisified (03:09)
11. Hepatic Tissue Fermentation II (06:36)
Re-issue of remastered issued in 2004. Includes Corporal Jigsore Quandary and Incarnated Solvent Abuse promo videos in Quicktime format.
Earache records Re-issued the album in 2008 as a dual disc in a digipak with on the audio side the same bonus tracks as the 1995 Re-issue and on the DVD side a 25-minute interview with as a bonus an interview from 1992.