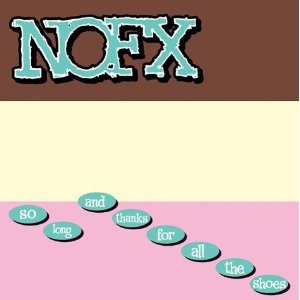 So Long and Thanks for All the Shoes

SludgeLeader
So Long and Thanks for All the Shoes Information

So Long and Thanks for All the Shoes Reviews

realemopolice  (90/100)
Date :  2014-07-11
"So Long..." starts off with full blasting punk rock songs, all of them shorter than the tunes on "Punk in Drublic" and "Heavy Petting Zoo". They are not as fast and melodic, but there's something in the lyrics and in the sound that reminds me of punk classics like The Ramones and The Stooges, but it's more polished than that.

The drums have some new sounds rather than the characteristic beat used in 90% of every Nofx song. "Champs Elysées" is a good example of that. The guitars, as always, are great and we can listen to lots of great riffs, although they are not that complex than the riffs in the next albums like "The War on Errorism", but it's a great start.

As a bass enthusiast, I noticied that Fat Mike really put some effort to this. It's the first Nofx album that the bass lines are pretty great and they are more independent from the drum beat.

Another great feature of the album is the ska influence being more active than in the past two albums, presenting great ska-like tracks like "All Outta Angst" and "Eat the Meek".

It's a great Nofx album, not as great as Punk in Drublic, but still a great album filled with amazing tracks.
1